Our website is reader-supported. When you buy through links on our site, we may earn an affiliate commission. Learn more

Before I get started with reviewing the Silhouette Cameo 4 upgrade, we have to start from the beginning. A Silhouette Cameo is designed as an electronic cutting machine for personal use. The silhouette cutter is designed to look like a home printer but offers a different service.

The device has been custom-built with PC as well as Mac OS software to sync with your computer using a standard USB cable.

The unit also comes with a sturdy but small blade to cut paper, fabric, cardstock, vinyl, and other materials so long as they don’t surpass the 12” wide and 10 feet long measurements.

As an individual seeking for a die cutting machine to carve out custom designs, you will never go wrong with the Silhouette Cameo series, especially the third series!

The Silhouette Cameo cutter still reigns as the best-selling product for this brand. Most users love the third version since not only is it good at its job, the manufacturer has gotten rid of all bugs and software mishaps.

Similar to its predecessor (Cameo 3), the cutter has additional features and essential upgrades. To help you distinguish this product from the rest of its family members, below, we take you through a detailed review covering the features, pros, cons, and things you should familiarise yourself with when thinking of acquiring this electronic cutter.

Although not considered to be the best cutter in its class when compared with other brands, Silhouette Cameo 4 cuts paper, and vinyl materials with precision.

I bought mine HERE. 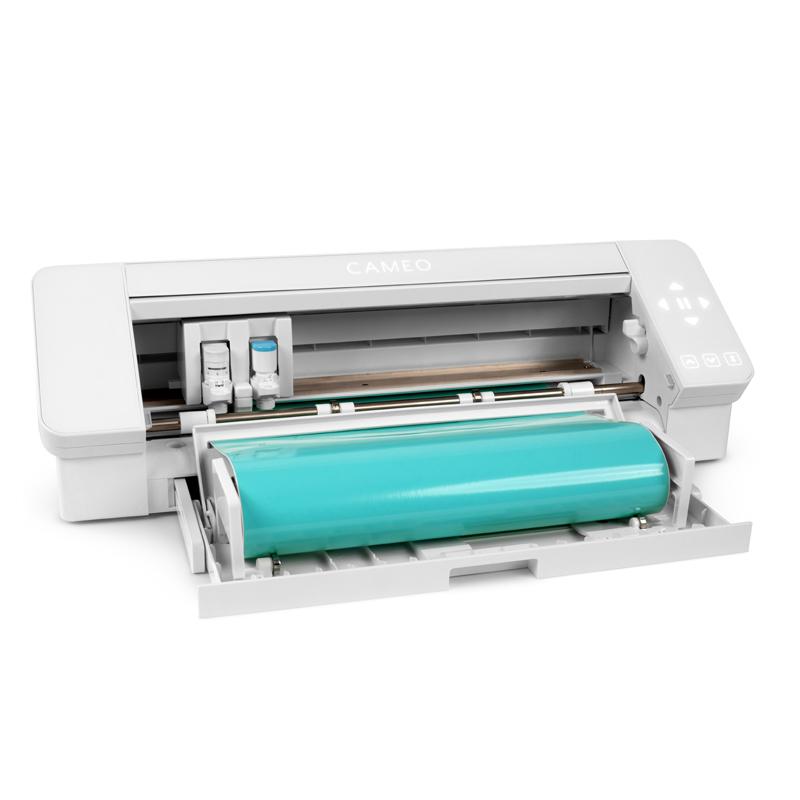 The Silhouette Cameo cutting range of devices offers everything you would expect to find in a modern digital die cut machine. The Cameo 4 comes with features exclusive to the Silhouette cutting products. Some of the features that stood out to me include the following.

An Auto Blade: this is a new blade featured in the Cameo 4 cutter. It’s designed to adjust its depth automatically to match the strength and power needed for different materials.

With such an addition, users now save time they would have used to take out the blade and make manual depth adjustments for every different material they want to cut. How does the AutoBlade feature work?

After selecting the image you want to cut, the machine detects the material you’re working on, and keys this information. The blade adjusts itself by tapping in the machine’s corner to make the right depth settings before it starts cutting.

A word of caution: after you insert the AutoBlade in the carriage, ensure that you lock it into position. You should ensure that the push mechanism remains in the lock position if you wish to get the perfect cutting depth.

Dual Carriages: the dual carriages are some of the significant upgrades to this Cameo series. In previous units, if one wished to draw and cut a single project, they had to switch off the device, either swap out the pen or the blade and restart the cutter.

However, with dual carriages, you don’t have to stop to make necessary adjustments; everything has been automated, thus making things a lot easier. Now you have the option of drawing on the spot with two separate colored pens and at the same time!

Storage: The Silhouette Cameo 4 device has been developed to hold multiple storage compartments. These additional pockets ensure that all your working tools are housed in the unit.

Whence you open the lid, on the left side, you will see two storage slots for holding your blades. Just near the machine’s back, a groove runs through, and it’s made wide enough to hold ten sketch pens in a horizontal position.

Lastly, you will uncover a pullout underneath the machine that’s split into two separate compartments. The right space is built to hold in the cross cutter, while the left chamber carried tools such as spatulas and picks.

PixScan Technology: a new feature that has eliminated the need to print the design from a printer, and instead, the user places the image on a PixScan cutting mat.

The mat is embedded with the registration marks, and once the material is placed on it, you can use either your smart device or camera to take a photo.

You can then proceed to upload the same on into the Design Studio Software, where the trace lines will be generated, and you can continue to cut!

This new feature is perfect if you are into making digital patterns in areas such as; magazine cut-outs, fabric patterns, stamp patterns, and hand-drawn designs. The PixScan mat also functions as a regular mat, so you don’t have to purchase an additional mat!

Full-Color LCD Screen: the introduction of a touch screen replaces all the buttons featured in previous Cameo devices.  Through this screen display, you get the chance to load and unload your mat as well as get mini-tutorials.

When you get stuck, the touchscreen display acts as a guide; moreover, the LCD screen is incorporated with audio feedback that is handy for newbies.

Print and Cut: this is a standard feature offered as standard in all silhouette machines. The additional feature makes it possible for the unit to cut out printed images.

The feature comes in handy for users cutting out things such as labels, gift cards, stickers, invitations, or tags, so you don’t have to cut them out using your hands. However, you will need to use a printer to print out the designs.

Using the Print and Cut feature on this device: start by either creating or uploading the designs of your choice in the Silhouette Studio Software.

Prompt the software to print out your image through your printer. Load the printed image into the Cameo 4 cutting device and commence with the cutting.

What makes this system simple is when you print the image from the software, it comes out bearing registration marks.

Once you load the printed material into the machine, the unit fires up the built-in sensor and detects these marks following their line up to make precise cuts around the image.

Different Kinds of Blades: Other than the AutoBlade, several other kinds of blades are compatible with the Silhouette Cameo 4 cutting machine. The following blades are consistent with this device…

What Are The Advantages of Using The Silhouette Cameo 4 Cutter? 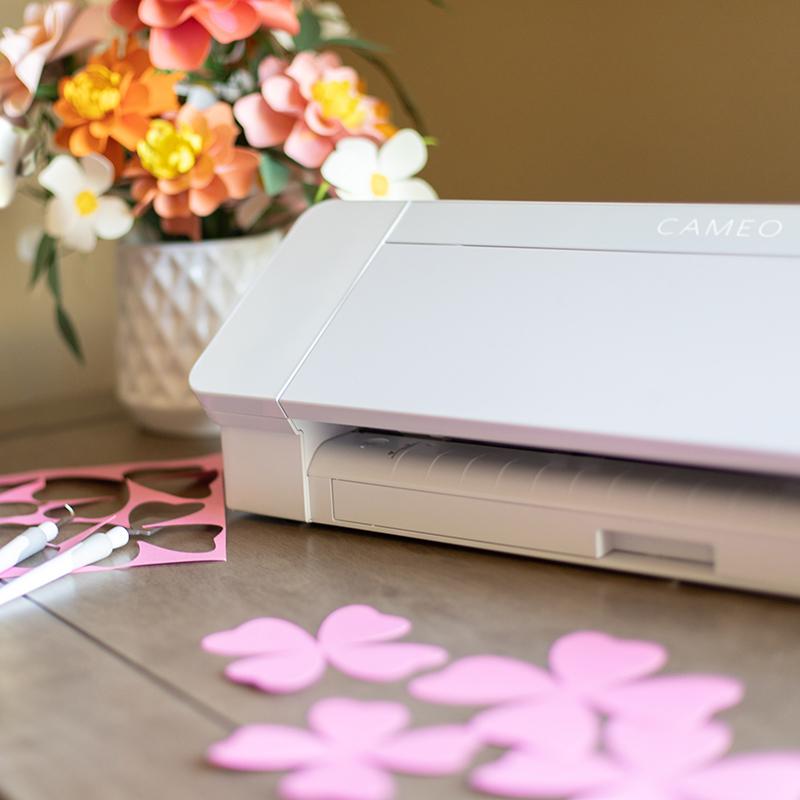 I should say that I stand by word that this is a magnificent cutting machine for the home office. Why do I say so? Well, let me explain…

Cutting Force: The Silhouette CAMEO 4 has a cutting force of 5000 grams or 5kg compared to the CAMEO 3’s 210 grams. That is an amazing upgrade!

Exemplary Software: The Silhouette Studio Software is free for users of this machine, over the period it’s been in operation, users are granted the chance to either purchase, import, or develop their designs from scratch.

Although you can only use it with a computer and not with a mobile device (not yet by the time of writing this article), the software is compatible with Mac OS and Windows Os.

For graphic designers or persons that are interested in using graphics software, they will feel at home using this software. Moreover, the Cameo 4 Studio software comes with additional features on the software that makes using this platform fun and also encourages creativity.

Bluetooth: Thanks to the integration of this feature, users can now practice wireless cutting, which is a cool thing I think!

AutoBlade Function: this automated blade adjusts the settings autonomously to give enough spunk to the material being cut. In essence, with this feature, you don’t need to stop your machine from making manual adjustments.

Sleek Design: Let’s face it when it comes to looks, Silhouette Cameo brand is a top contender. The curves on this cutting series are smooth, sexy, and nostalgic!

Storage: The storage compartments in this new device are plentiful and allows users to store all their tools in the unit without having to create space elsewhere.

LCD Display: The touchscreen display is not only responsive, but it’s also easy to use and comes packed with a lot of information.

Best Cutting Platform: For its range, many users tout the Camon 4 as the best device for cutting through thick materials. Moreover, it works as a dual carriage that allows users to cut & sketch simultaneously!

Features and more Features: when you access the design store, you are welcomed to space where you can shop over 100.000 designs, you also get access to 100 free designs. If there’s none that you fancy, you can opt to create your own!

Lengthy Cuts: With this cutting device, you can cut out images that are up to 10 feet long! Meaning you can work on signs and banners from your home computer!

Full-Time Access: Thankfully, the Silhouette cutting machine has been designed to work both online and offline. The software is compatible with both CorelDraw and Adobe Illustrator. You only need to install in a plugin that will set you back $40.

What Are The Disadvantages of Using The Silhouette Cameo 4 Cutter?

Most people who find fault with this device site that this particular model (Cameo 4) doesn’t cut as accurately or as fast when compared to other brands of the same range.

Others complain that the unit is a bit heavier than its predecessor; however, I will still add that you can move it around without growing tired.

Finally, one thing that pissed me off about this is the $50 I have to cough to upgrade the software from SVG or PDF importing, what made my face turn red is the $100 price tag to get the software upgrade that I need to export JPGs, SVG, and PDF, I mean I can always search for a free software…

The Silhouette Cameo 4 is a machine in its class; however, despite being not the most versatile cutting tool, it works best as a home office companion.

Since you’re more inclined to work on fabric, paper, vinyl, etc. materials and not balsa wood, you can make some super saving getting this device. If you are a fan of die-cut machines, you will be floored by the range of featured found in the Cameo 4 unit.

What attracted me most is the ability to use it whether I am connected to the internet or not, now I can do my designs without worrying about a hacker jacking my designs!

If you want to check it out, you can do so by clicking THIS LINK.

Best sewing machine for 10 year old:This Is What You Need To Know

The Best Self Healing Cutting Mat: My 2019 Favorites!

What is the best quilting ruler to use?

Christmas gift ideas for college students: what gifts are the best for a student

Mechanical Vs. Computerized Sewing Machine: All You Need To Know

5 Tips to Avoid Breaking Needles While You Sew